You are here: Home1 / News2 / News3 / Gratitude is at the center of my relationship with EBMC – Damali... 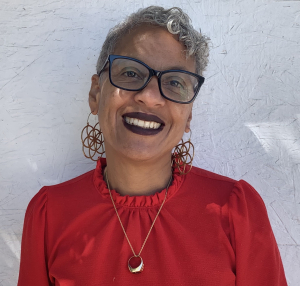 When I first came to the East Bay Meditation Center in 2014, I was going through a really tough time, feeling incredibly sad, after a breakup. I had some friends who attended EBMC classes, and recommended that I come to a daylong. In early 2015 I attended my first daylong, which was specifically for Black women, and I fell in love with EBMC from the beginning. The idea and practice of mindfulness brought me to a place where I felt like I could feel my feelings, notice them, and move through them in a more skillful way. EBMC offered me a sense of belonging because it welcomes all people, in ways that are intentional in creating spaces for BiPOC communities and Black-identified people specifically. Long after my feelings of grief had healed, I remained connected to EBMC because it felt like home.

During my first experiences at EBMC, I particularly appreciated the ways in which the Center made it possible for me to attend the classes. I was a single parent with kids in high school, dealing with lots of expenses, and I didn’t have the kind of money typically required to attend workshops and classes. At EBMC, I was able to attend and give whatever I could. I was really grateful for the ability to access the teachers and the space at EBMC regardless of my financial limitations at the time. I kept coming back, and I went to other daylongs, attending weekly class series and practice groups.

After a while, I applied to the fifth cohort of the Practice in Transformative Action (PiTA) program. At that point, EBMC became a core spiritual home for me, and it was foundational in growing my meditation practice, in particular the Vipassana meditation practice. During that time, I was going through a really tumultuous time at work, and feeling incredible burnout. Everything that I learned at EBMC supported me in taking the time that I needed that year and the year after to break away from the pattern of burnout that I was feeling, and to ground myself in myself and what I needed. Without a space like EBMC, I wouldn’t be where I am now, which is really tuned in to what I need, and that tuning in comes in the silence and stillness of a meditation and mindfulness practice.

I am deeply grateful to be part of the EBMC community in multiple ways, and to be involved now as a PiTA apprentice teacher, which is deeply gratifying for me. I receive so much and I live in a state of gratitude just to be part of our amazing teaching team. For me, I can say wholeheartedly that gratitude is at the center of my relationship with EBMC. I invite you to join me in supporting this spiritual refuge and sharing your gratitude to EBMC.

EBMC is a home where I get to be all of my wonderfully messy evolving self –...
Scroll to top