You are here: Home1 / Curricula

Are you new to meditation? Curious about Buddhism? Looking for a spiritual home?

Registration for each class series opens around 4 to 6 weeks before the first class in a class series.

This five-month Core Curriculum will focus on the Theravada and Mahayana Buddhist traditions, while integrating aspects of other Buddhist lineages, and also embedding the teachings in a social justice perspective aligned with EBMC’s vision. When you register, please keep in mind the overall intention of the half-year curriculum, since each program in this curriculum is intended to build on the previous programs in the curriculum. If you have questions, please email admin@eastbaymeditation.org. A list of recommended Buddhist reading appears here. The classes in the five-month curriculum are on Wednesday evenings from 6:30 to 8:30 PM Pacific Time, and are as follows:

Classes and Events
In addition to the Core Curriculum, EBMC regularly offers a wide range of classes appropriate for those new to meditation. Sign up for EBMC’s email updates to get our latest class listings.

Establishing a Regular Meditation Practice and Building Community
Practicing with others is an important way to develop and sustain a consistent meditation schedule. EBMC has several weekly sitting groups to help you practice in community. The groups are listed here. 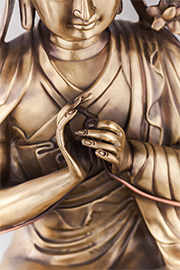 Registration opens around six weeks prior to the start date of each class series. We invite those interested to sign up for our weekly program announcements email.

This Buddhist curriculum at EBMC has three components:

Path of the Bodhisattva Class Series TWO:
Wednesdays, 6:30 – 8:30 pm Pacific time
with Mushim Patricia Ikeda, one of EBMC’s core teachers
Note: This is a deepening of the Class Series One materials, not a repeat
November 2, 9, 16, 23

These times are full of uncertainty and fear — and opportunities for spiritual breakthrough. In Mahayana Buddhism, the Bodhisattva is an archetypal great being who tirelessly and joyfully works to liberate all beings from suffering. For the fourth time, EBMC will offer two class series exploring what it means to creatively embody the Bodhisattva teachings. Those who complete both class series may participate in the final daylong and either witness or take Bodhisattva precepts and vows in order to strengthen their commitment to collective liberation. These are the same vows taken by His Holiness the Fourteenth Dalai Lama.

Also, those who do not wish to take the Bodhisattva vows may take either of the two class series. The final daylong is open to everyone who wishes to witness the joyful ceremony (you do not need to have taken any of the previous classes, though it is recommended that you do so) and those who have completed the previous classes and have received permission from the teacher may receive the Bodhisattva Precepts, take the Bodhisattva Vows, and at that time they will receive a Buddhist name from the teacher.  Meditation (instruction provided for beginners), Dharma talks, and interactive exercises.

Online participation on Zoom is certain; we may be able to do simultaneous in-person participation if hybrid classes are able to be held at EBMC in the fall of 2022. Questions: admin@eastbaymeditation.org

Mushim (Patricia) Ikeda received Bodhisattva precepts and vows in Toronto, Canada in 1983. She is an EBMC core teacher, a widely-published writer, and a social justice activist. Mushim has practiced as both a monastic and a lay householder.  For events, writing, video teachings, go to www.mushimikeda.com

The picture of an individual, usually a thin white person, sitting cross-legged with eyes closed, “mindfully” seeking “inner peace” in a meadow or by a waterfall has become a meme that is used to represent Buddhist practice in the U.S. In Western “convert” Buddhist circles, the Buddha’s Path to liberation from suffering (the Eightfold Path, also known as the Middle Way) is often represented as focusing on the individual and on sitting meditation. Yet, none of us exists as isolated individuals and social and political processes are subject to the same law. History teaches us the interbeing of politics. “My” existence as a political and social subject is a product of “your” political and social histories. There is no present without representations of the past – and what we call the future is conditioned by stories of both the past and the present. Systemic oppressions arise and are sustained in this manner.

The purpose of this 4-month curriculum is to explore how an understanding of historical interbeing and the Buddha’s teaching of the Eightfold Path can inform our activism and vice versa. The delusion of isolated history fragments us from ourselves and each other. When we look at how our people’s history does not exist in isolation, but instead arises in dynamic relationship to multiple peoples’ histories, then we may find a basis for a deep solidarity that sustains movement building. “History” lives and changes as we live and change. As we understand these changes, we can be more skillful in bending its arc towards justice.

Classes will be taught by socially-engaged Buddhist teaches and leaders and will include meditation practice, interactive exercises, Dharma talks, and discussions.

The curriculum begins in September with a one day workshop on restorative practices led by the Restorative Practices for Dharma Practitioners Sangha, and is then divided into the three sections of Eightfold Path: