EBMC inspires me to find ways to give back – Angel Nguyen

You are here: Home1 / News2 / News3 / EBMC inspires me to find ways to give back – Angel Nguyen 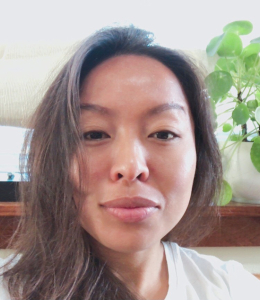 An Asian woman with long dark brown cascading hair, wearing a white t-shirt, with a Chinese money plant and a bright window behind her.

What I remember vividly from my first class at EBMC, over ten years ago, is the ease and sense of inclusivity that made me feel immediately at home. After my first meditation class at EBMC, I started attending the People of Color (POC) every Thursday, and I deeply resonated with the dharma talks as different teachers would share their spiritual journey with us each week. What I felt at the POC Sangha, and at EBMC in general, was an experience that is different in the ways it deconstructs mainstream narratives of power and privilege. This space felt more familiar to me, a space that is more rooted in cultivating connection and sustainability.

At that time, I learned that I can access EBMC’s wisdom and community offerings regardless of my financial capacity because of a practice that invites people to give what they can from a place of gratitude, or dāna. That practice, which EBMC cultivates with so much intention, felt very transformative both to me as an individual and to the ways in which we relate to access and money as a community. This practice of heart-centered generosity stuck with me, and drew me further into EBMC.

As I became more active at the EBMC community, I resonated deeply with values of radical inclusivity, where racial justice and disability justice are prioritized in practice spaces. A close friend of mine, Renato, who was an apprentice teacher at the Practice in Transformative Action (PiTA) program, told me about his experience there and invited me to apply. I applied and was accepted for the PiTA 2019 cohort. I immediately could relate to the folks at PiTA, as a secular-mindfulness practice led by a woman of color, Mushim Ikeda. In this program, I was able to have my own support group where we practiced together, and where I was able to cultivate a meditation and mindfulness practice that I now share in my own workspace with my colleagues at Kaiser.

My experiences at EBMC and PiTA were personally transformative, and soon I was looking for ways to give back. I helped Mushim with facilitating Gift Economic talks at PiTA, and I volunteered with the POC sangha. Giving back helped me feel rooted in my commitment to EBMC, to reciprocate the gratitude that I deeply felt from the practices I have learned there. I wanted to help others deepen their practice of mindfulness, and sacred reciprocity, and one way for me to do that was becoming more involved with PiTA, where I am now an apprentice teacher. Join me in expressing #EBMCGratitude today and uplifting sacred reciprocity by donating to EBMC.

Is EBMC Reopening Its Physical Site? FAQ
Scroll to top