News
You are here: Home1 / News2 / News3 / Here Are Ways You Can Help People During Hurricane Harvey

Here Are Ways You Can Help People During Hurricane Harvey

As our hearts break for Houston, the Gulf Coast, and other affected areas, here are ways to contribute. 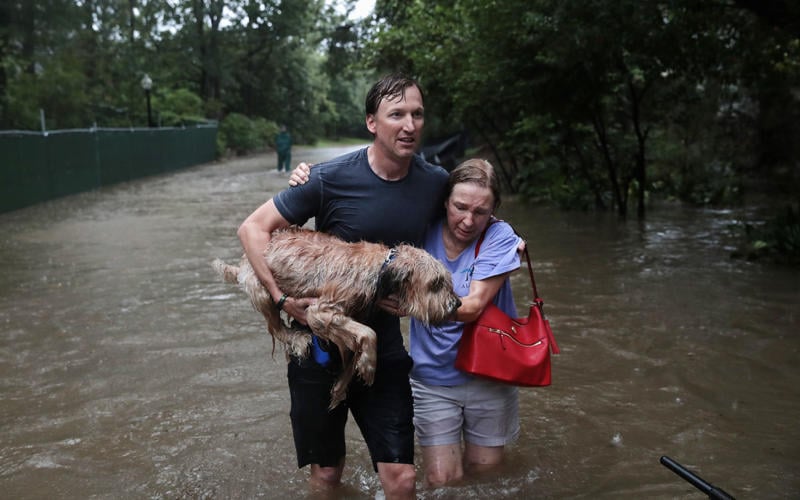 Andrew White helps a neighbor down a street after rescuing her from her home in the upscale River Oaks neighborhood after it was inundated with flooding from Hurricane Harvey.
SCOTT OLSON/GETTY IMAGE

If you’re in Houston, on the Gulf Coast, or in one of the places inland that’s experiencing massive flooding and other catastrophic impacts from Hurricane Harvey, you’re likely too busy to read this right now. But if you’re elsewhere in the state, you may have—like us—found yourself glued to the news coming out of affected areas. People are suffering. We don’t know what’s going to happen. We don’t know how long it’ll take before those places are safe again. We don’t know if they’ll ever return to normal. Because according to the National Weather Service, nobody alive has ever seen a storm like this in Texas.

But even if you are far from the devastation, there are ways to contribute. There are organizations that need support—now more than ever—that will ensure that people impacted by the storm have the resources they need to keep their lives functioning. Here’s a list of some of them, and what they’ll be doing to help:

The Texas Diaper Bank, which is based out of San Antonio, is putting together relief kit for families with very small children who need access to clean diapers in the midst of flooding and evacuations. Diapers take up a lot of space in a delivery truck, which means that other relief organizations have to decide between bringing diapers or food to affected areas. The Texas Diaper Bank fills in that need.

The Driscoll Children’s Hospital in Corpus Christi weathered the storm well, never losing power. It’s accepting financial donations now, and if you live in the area and want to help, you can also donate blood. They serve a large area, and people from many affected parts of the coast are likely to need their services.

We all saw the photo of the dog carrying the full bag of food around after the storm, right? Good boy, Otis. And there are a lot of pets who were uprooted by the storm. The SPCA of Texas is taking in hundreds of animals transferred from shelters on the coast who aren’t safe where they are right now. You can donate to the organization to help defray the costs—or you can open your home and foster a displaced animal until it can be reunited with its owner.

If you’re in Austin and want to work with a local org, Austin Pets Alive! is doing similar work, and has similar needs—cash, to keep operating, and volunteers to foster animals. They can also use certain pet supplies: large plastic or metal bins with lids to store food, leashes and collars, cat litter, large brooms, cat-specific beds, and liquid laundry soap. (The organization says they’re good on crates and pet food now, and don’t have much space to store them.)

To Help People With Medical Needs

Even as relief organizations work to help large numbers of people, it’s difficult sometimes for them to provide for people with special needs. Portlight, which has provided inclusive relief to people with disabilities for twenty years—including in Hurricanes Katrina and Sandy—is working to ensure that people who require medical equipment and assistive technology have what they need after they evacuate, and to make sure that those same folks are able to get to safety. They accept donations via PayPal.

Direct Relief USA offers prescription drugs and other medical supplies to those who need it in emergency situations, and works with clinics and primary care doctors to ensure that people are able to get what they need when they need it. They’re accepting financial contributions.

Here’s a list of food banks in both affected areas and in places where those affected are likely to spend some time in the immediate aftermath of the storm (via the Houston Press):

To Help The Homeless

The Houston Coalition for the Homeless is facilitating shelter for homeless people in Houston, including offering up-to-date information about which shelters currently have space, who’s the best fit for each one, and how to get there safely. They’re accepting financial donations to continue their work.

To Help Those Displaced

If you’re not in one of the affected areas and you have a spare room, you can host someone by listing your home on Airbnb for free, with no service fees to anyone. Right now, most of the listings are in Austin, Dallas, and San Antonio. If you’re in any of those cities—or another part of the state that’s not experiencing flooding—you might consider listing your space so displaced people have more options.

In Dallas, Trusted World is operating three shelters for evacuees. They need donations, supplies (clean clothing, non-perishable food, toiletries, diapers, and baby formula), and volunteers to help sort out the things that people have dropped off.

Global Giving is trying to raise $2 million to help those affected by the storm. As of this writing, they’ve raised $43,000, but the campaign had just launched. The organization provides food, gas, clean water, hygiene products, and shelter in the short-term, and then funnels the remaining resources to local organizations to facilitate long-term recovery.

HEB doesn’t accept donations, but it’s worth being aware that the supermarket chain provides emergency response services, mobile kitchens, and disaster-response units to affected areas. (They also announced on Sunday that they’d be collecting donations at the register for the American Red Cross, The Salvation Army, and Feeding Texas.) That’s especially important as a number of stores in affected areas (including the entire Houston area) are closed. You can learn more about which stores are closed—and which ones have reopened—here.

(Thanks to Jia Tolentino, Andrea Grimes, and the Houston Press for suggestions on where you can help.)